June marked the first tour of my new duo with Eva Väljaots. A highlight for us was arriving in Staffordshire to find Eva already featured on the front cover of The Leek Post. We had the pleasure of being on BBC Radio Stoke with Lillie-Mae Stubbs and BBC Radio Shropshire with Genevieve Tudor. You can now hear these recordings on our Soundcloud. A grand time was also had at The Great Get Together at the Foxlowe Arts Centre, Leek organised by Peace Through Folk as part of a nation-wide campaign aimed at bringing communities together inspired by the late Jo Cox. The trip was rounded off with a superb evening at Floodgate Ale House, Stafford. Our concert was sold out and the atmosphere was perfect, thanks to all who were there, especially Esther, Andrew for such a wonderful pub.

It went so well we’re now planning two UK tours, one in late December/ early January and another in late May/ early June. 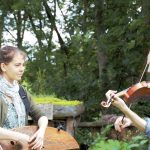